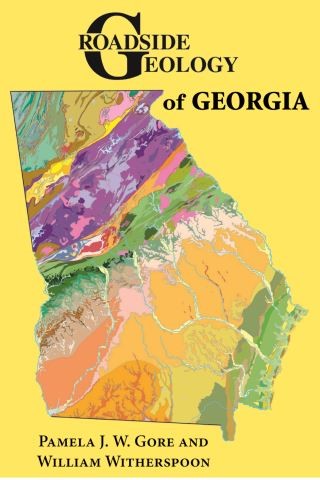 Ride along with geologists Pamela Gore and Bill Witherspoon on this extraordinary tour of the Peach State’s varied terrain. In 35 detailed and densely illustrated road guides, the Roadside Geology of Georgia examines Georgia’s fascinating geology and reveals the stories that lie beneath the surface.
You’ll be amazed at Georgia’s geological diversity, from its shifting barrier islands along the coast to the sandstone ridges in its northwest corner. At the Cumberland Island National Seashore you’ll find the ruins of Dungeness, the once-magnificent Carnegie estate built of local mineral resources, and encounter wild horses grazing among windswept dunes. In Atlanta, the white whaleback of granite called Stone Mountain will impress you with its protruding “cat’s paw” minerals and stony layers that are sloughing off like the layers of an onion. In the Blue Ridge Mountains you can witness Amicalola Falls, one of the highest cascading waterfalls east of the Mississippi River, and Tallulah Gorge, one the deepest gorges in the eastern United States. And in the iconic Okefenokee Swamp of south Georgia, you’ll wade through the gator-filled blackwater of one of the largest wetlands in North America.
With its engaging prose and 250-plus color photos, maps, and figures, Roadside Geology of Georgia takes you beyond the rocks to unearth the billion-year history of the Empire State of the South.